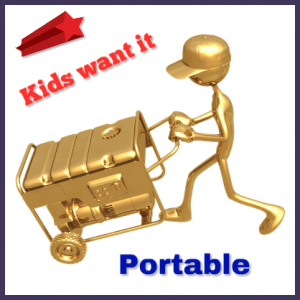 There’s something kids love about doing karaoke.  Maybe they love hearing themselves sing to their favorite songs, or imagining they are a famous rock star, or just having a great time with their friends.  Whatever it is, kids just love karaoke machines.  Here are 6 qualities kids want in a karaoke machine:

Kids generally want a machine that’s going to be easy to transport.  They don’t want a heavy machine with lots of different pieces that need to be connected.

The reason portability is so important to kids is because children are very energetic and likely won’t want to just stand still while they sing karaoke.  They will enjoy taking the machine to different rooms in the house.  One child might want to put it in her bedroom so she and her friends can do karaoke during a sleepover. Another child might want to bring the machine into the living room for a family gathering.

Having the option to be able to easily and quickly move the machine around the house is something children will appreciate.  If there are speakers that have to be moved separately and then re-connected every time the machine is moved to another location, it might not be as much fun for the child, and he or she might have to ask for help from a parent.  Going along with that, it’s important that the machine is simple to operate.

A child doesn’t want to constantly ask his or her parents for help to use the machine – it needs to be something a child can operate without any difficulty. Check out this Singing Machine Karaoke System for a great example of a fun karaoke machine for kids.

Disco lights are a really fun feature that many kids karaoke machines come equipped with.  The lights add an element of glamour to the performance and make the child feel even more like a superstar.

Some machines even have lights that will flash in time with the music.  Disco lights are definitely a feature that should come with a karaoke machine for kids, as it will be very enjoyable for them using it.

Kids will enjoy turning off the lights in the house and having just the disco lights on while they sing – it will make it feel like a real performance.

Kids want to be able to have many options when it comes to ways they can connect their karaoke machines.

Connecting a karaoke machine to a TV will give kids the ability to have their friends over for a party and have everyone be able to view the lyrics.  Many kids karaoke machines come with this capability, and it’s certainly something to consider when deciding what karaoke machine a child would want.

These days, most kids have some type of device that plays music, whether it is an iPod, MP3 player, or even a smart phone with stored music.

Kids love having their own music, and want a karaoke machine they can connect their device to and stream their music.  Another benefit of this is being able to buy and download karaoke songs to these different types of devices rather than having tons of karaoke CDs taking up space in your house.

Balance control:  This is a feature that enables the user to control the left and right channel balance.  This means a person can have a choice between hearing just music, or music and vocals – kids like having this as an option.

Digital key control:  This is a function that can adjust the key of the music or vocals.  Children, especially those that are a little older and understand music, will appreciate this function as it will help their voices sound more professional.  It also makes it possible for someone to sing a song that might be slightly out of his or her range, so that’s another reason kids will enjoy this feature.

Echo: An echo effect is fun for just about anyone, but especially for kids.  Children often like to mimic and imitate their favorite singers, and an echo effect will help them sound better.

Auto voice control:  This is a feature that kids will also enjoy, as it gives the user the option to replace the lead singer’s voice with the child’s own voice.  This can only be done with a multiplex CD.  Kids love this function as it allows them to sing along to their favorite songs without the lead singer’s voice. 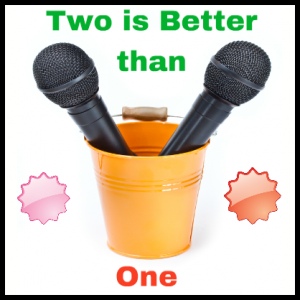 Another feature that is almost a necessity for a karaoke machine for kids is two microphones (or at least two microphone jacks giving them the ability to plug in their own microphones to the machine.)

Kids want to be able to play with their karaoke machine when their friends are over, and if only one person can sing at a time, it won’t be very much fun.  With two microphones, two kids can sing at the same time and do duets together.

Also, if the child has many friends over for a party, it will be more enjoyable for those who aren’t singing to watch while two of their friends sing together.

These six features are what children want most in a home karaoke system.  Finding a portable karaoke machine that has all these different functions and features shouldn’t be too difficult as these are all things that most kids would want.

To recap, the best karaoke machines for kids are going to be portable – they will be self-contained and easy to move from room to room.  It should also be simple to operate so the child can use it without help.  It should also have disco lights for an even more exciting experience.

It should have the ability to be plugged into a television so lyrics can be viewed by everyone with ease.  It should be able to be connected to an MP3 player or iPod so the child can stream his or her own playlist to the machine.  It should have fun voice features like balance control and an echo function.

2 thoughts on “6 Things Kids Want from a Karaoke Machine”