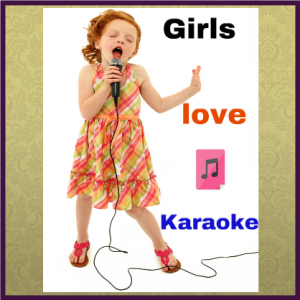 I never thought the day would come where I would be shopping for a karaoke machine for girls, but last week I got an invitation to my niece, Megan’s, birthday party.  She is turning 7.  Her mom, knowing that I’m somewhat of an expert in these matters, called to tell me that other than a few small gifts, the main thing she had on her wish-list was a karaoke machine.

I knew how much fun Megan had the last time she and her family were over at my house for dinner – she had played with my system almost the entire time, only stopping once to eat some ice cream. So it shouldn’t have come as a huge surprise that she wanted a karaoke machine of her very own.  Her mom was hoping I could research some of them and let her know what would be the best machine for her to purchase.

Another bonus would be a video recorder so she could watch her performances – that wasn’t a necessity either, but definitely something to keep in the back of my mind.  So, with those criteria in mind, I got to work looking for the best girls karaoke machine I could find.

See, we both know that as soon as you starting shopping around for a karaoke machine for kids, you come across a garden variety of features in product description and this does not make your life much easier. Parents know that this is a great gift for children but at the same time, it’s time consuming to make an informed decision and often times parents end up being disappointed with their purchase.

After much thorough research, I decided to share my findings that allow parents to get the most of their hard earned dollars and make a girls karaoke machine selection with confidence. I am sure you will find my post very helpful.

This was the first kids Karaoke Machine I came across in my research, and it seemed like a good and obvious choice for a 7-year-old girl.  It’s very pink, which I guessed would probably please my niece, even though I know that wasn’t a requirement on her list.  So, it’s definitely a karaoke machine for girls, and one that I think a little girl like Megan would certainly enjoy showing off to her friends.  Here are the pros and cons on this machine:

TV Connection: This machine can be connected to a TV so lyrics can be easily read by everyone.

This system also comes with voice and sound controls such as Echo control, Balance control and Auto Voice Control! Pretty cool for a karaoke machine for kids. Believe it or not, this is a machine that works with iPad, iPod, iPhone and alike.

Also it comes with a CD/CDG player that can play CD’s recorded with lyrics. Moreover, this system offers a 5” black and white screen that can show the song lyrics if you don’t want to use the TV for this purpose.

Also, I noted another important feature which is the fact that this machine works also with batteries. This is something very useful for kids as they can take it with them to just about anywhere.

Last but not least, you also get the Video camera for recording performances. A nice bonus Megan would care about. This is a very complete product for the price and if the kid is into Hello Kitty character, this system should be definitely on the list.

Microphone:  Although it does have two microphone inputs, it only comes with one microphone.  Not a huge deal, as an additional microphone could be purchased relatively inexpensively, but still something to think about.

This is the most popular karaoke machine for kids, period. The reason is obvious, the movie Frozen and everything related to it. Girls love this and dream about it. It’s tons of fun for them to take that microphone and sing along the Frozen movie popular songs. So you won’t go wrong with this one, as you may have already guessed. If interested in reading my in-depth review of this karaoke machine where I explain every single detail about various model, click on the image below and you will be all set.

This machine can be connected to TV so kids can enjoy a larger screen while playing and singing songs. It is a very portable system so it can be dragged into various rooms, and by the way this is a very big deal for kids and they love this feature. Along the same line, there is no complicated setup and can be plugged out of the box and be used. So no setup headaches for parents, especially in holiday time, no one wants to do that, right?

This karaoke machine has an AUX input so your girl can connect using her iPod or iPad and play her favorite songs from her playlist. This is also a very cool feature I would say.

There are two inputs for microphones so two singer can potentially sing at the same time and have fun. Please do note that ONLY one microphone comes with your purchase and if you need, a second one, it has to be purchased separately. Take a look at my recommendations here where I suggest descent quality with very reasonable prices and do the job for kids.

This wonderful girls karaoke machine come also with a CDG player and typical sound and voice controls that most karaoke systems would have nowadays. The price is reasonable as the quality is descent and this makes a perfect birthday or Christmas gift for your young girl.

This system stood out to me because it’s not blatantly a kids karaoke machine, but it definitely has a kind of young and cool appearance that I think my niece would enjoy.  I also thought it looked (at least from the pictures) like a good-quality piece of equipment.  It has the disco lights and the dual microphone inputs, so it definitely was in the running as a possible machine for Megan.

As the name indicates, this system comes with disco lights and can also hook up to TV.

Auto voice control/balance control/echo control:  again these are very cool and relatively advanced features. I don’t know for sure if a 7-year-old would know what to do with all these different controls, but I’m fairly certain she would have fun with the echo effect – who wouldn’t?  The other features are things I think she might eventually enjoy, like being able to mute the lead singer’s voice on a multiplex CD with auto voice control.

This machine comes with a CDG player.

Volume:  Some consumers thought the volume was a bit limited and that it wasn’t always loud enough.

This portable karaoke machine would not have a built-in screen and cannot operate with batteries. I noted also that this system does not come with a video camera to record performances.

Note also that this system does not have an audio in jack and therefore cannot connect to MP3 players or smart devices.

This Machine may not be all pink, but it certainly seems like something that would appeal to a young girl.  The pink accents make it feminine, without screaming “7-Year-Old Girl!” like the Hello Kitty system.

Batteries:  This machine works with batteries, so you can take it just about anywhere.

Nice-looking:  It’s one of the more unique karaoke machines for kids that I’ve seen as far as its appearance – something a young girl would definitely like.

The same as the previous ones, this is a karaoke machine with TV hook up and also comes with a CDG player.  Only one microphone is provided with your purchase although there is a second microphone jack that gives the possibility of using two microphones at the same time.

One interesting thing I wanted to mention about this machine is that 40 bonus songs are included with the purchase. This may give you a good head start before worrying about what CD to buy or what song to download etc.

No video recording:  Again, this wasn’t a deal-breaker for my niece, but definitely would have been an added bonus if it had the ability to record.

Other than the Hello Kitty machine, this was probably the most girly, pink karaoke system I found.  Barbie Karaoke Machine has all the main components I was looking for – the dual microphone inputs, and the disco light effects.  Here are the other pros I found, along with some cons. 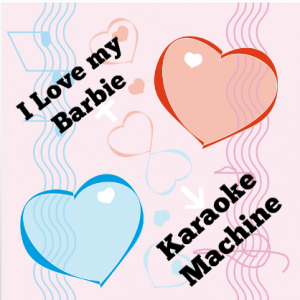 Echo and Auto Voice Control:  Again, I’m not sure how much my niece would get out of the auto voice control, but I know she would love the echo effect, so that’s definitely a plus.

Easy to operate:  Just as a karaoke machine for kids should be, from the reviews I learned that owners found this system easy to use.

Barbie: I’m not certain this is exactly a con, but I do know that young girls tend to like something one week and hate it the next.  She might be into Barbie this week, but when that phase is over, will she still enjoy playing with this karaoke machine?  It might not have a broad enough appeal for it to be useful for a long period of time.

Also I need to mention that this one cannot connect to MP3 players and similar devices. There is simply no audio input that would allow this functionality.

This last one, is a bonus one… I know I promised to write about 5 of them but I am excited about this one as well and thought I would share what I know about this one too.

This machine caught my eye right away because, not only is it pink, but it’s nice and compact with a little handle on top making it look almost like a girl’s handbag or accessory.  It has two microphone jacks, and the disco light display.

This karaoke system is definitely something a young girl would love – it’s small, pink, and lights up.  What more could a little girl want?

In terms of other features and pros and cons, this system is very similar to The Singing Machine CDG Portable Karaoke Light show as described before. The main difference is mostly the color and the design.

There are definitely some really nice karaoke machines for kids out there, and specifically girl’s karaoke machines.  I’m confident that my niece would be extremely pleased with any one of these machines.

In order to make your life easier I have summarized the main features and how they compare for these products in the table below: